Over the past month or so I’ve watched several long movies. (I consider a long movie to be about 2 1/2 hours. Anything longer than that is a Peter Jackson movie.) These require a major time commitment, so I’ve been rating them on a scale according to how good of a return on my investment I feel I’ve received. They’ve ranged from “OMG I need to call somebody right now and talk about this and then watch it again as soon as possible!” (Prisoners) to “I could have done something much better with those 2 1/2 hours (or with those actors, actually)” (Cloud Atlas).  Gone Baby Gone fell somewhere in the middle.  It was very good, but it didn’t quite suck me in the way Prisoners did, which is probably a good thing for my mental health.

This past week I watched a long movie that I gradually came to realize was really good.  I think I would have realized this about War Horse (2011) earlier (like, before I was over halfway into the movie) if someone had told me what to expect.  So I’m going to tell you some things you need to know about War Horse, and then you should watch it and tell me what you think.

1. The two main characters of this movie are in the title: the war (World War One, or the Great War) and the horse (Joey, a beautiful thoroughbred that even I, by no means a horse connoisseur, could appreciate).  Beyond these two, there is little character development, although you do get to know the central lad (I call him this because he’s somewhere between a boy and a man) and his parents fairly well.  Do not allow yourself to get attached to the other characters.  People die in wars.  And in this movie, even if they don’t die, the flow of the story will steal them away from you.  (See #2 below.)

Another way of putting this: Don’t watch the movie for the actors.  Benedict Cumberbatch fans, he makes one big speech, gets berated by a German officer, and then is outta here.  David Thewlis fans, don’t expect Remus Lupin.  In this movie, he’s mean and sarcastic and wears ugly tweed suits.  This is not any particular person’s movie, except maybe Steven Spielberg’s.  It’s very telling that there are no opening credits. 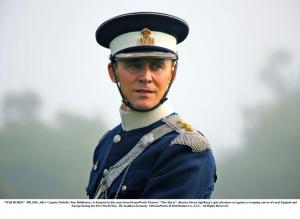 Don’t get attached to Tom Hiddleston’s beautiful face.  You won’t be seeing it for long.

2. This movie is episodic.  It does have one overarching plot (Will there be a reunion between the horse and his boy?), but within that it’s composed of short vignettes tied together by Joey.  This is really cool because you get to see the war from a variety of perspectives, but it is jarring if you’re not expecting it, since we’re so little used to narratives told this way today.  Now that I look back on the movie, I think the episodic nature helped me to enjoy it, because it made the movie feel shorter than 2 1/2 hours.  Be warned, though: the first half-hour, before the war and the vignette-hopping start, is a little boring.  BUT see #4 below.

3. There is very little fanfare in this movie, and I think that’s healthy in a war picture.  This is especially the case with the dialogue.  There is exactly one inspiring speech, and its function is to show you that inspiring speeches (like drawn-sword cavalry charges) have no place in modern warfare.  The dialogue in general is very simple, almost to the point of banality.  But that’s how real people talk, so I much preferred this to the cheesy, overblown banter and speech-making that you often get in war movies.  Just don’t expect to be trading War Horse quotes with your friends after you watch this.  It’s not a quotable movie.

4. Although I said that the first half-hour is a little boring, I must qualify this by saying that the Devon (England) countryside is a feast for the eyes: green pastures, blue skies, gray stone cottages.  But it feels real.  (There’s a lot of brown mud too.)  Also, the very last scene of the movie has this spectacular orange sunset that throws the human figures into these breathtaking silhouettes.  Seriously, even if you hate the whole movie (but you won’t), you have to keep watching for this scene.  And while we’re on the subject of beauty, the score, always an important factor for me, is John Williams doing his best Ralph Vaughan Williams impression–which is not a dig at John.  I just mean that nobody will ever be Ralph Vaughan Williams again, but this score, with its strong English folk song influences, comes respectably close.

Ok, I think you’re now prepared to watch War Horse.  If you do, please comment below and tell me what you think!