Last night while trying to fall asleep, I chose my five favorite animated Disney movies (not counting Pixar) and figured out why I like them so much.  They can be categorized into two I loved when I was a kid (1 and 2), one I liked as a very small child and later rediscovered for different reasons (3), and two that are my favorites now and probably always will be (4 and 5).

1. Sleeping Beauty.  I think it’s accurate to say that this movie inspired my first experiences with cosplay.  As a little girl I used to put on a blue dress and pretend to be–no, not Princess Aurora, but Merryweather, the chubby fairy who doesn’t speak but always seems to be indignant about something she can’t articulate.  I was an odd little girl.  I haven’t seen the movie in years, but I still think it’s beautiful and effectively scary.  Am I excited about the Maleficent movie coming out next week?  Not really, though I’ll probably go see it.  I have a hard time with Angelina Jolie.

2. Pocahontas.  This movie came out when I was 11, and I was really into it.  I had a lot of Pocahontas merch–I remember a nightshirt, when nightshirts were a big thing, and a necklace that I took apart so that I could string the beads onto other necklaces.  I was an odd tween.  I knew all the lyrics to “Colors of the Wind,” and of course I still do, because you don’t forget songs you learn in childhood (which is why I still know the lyrics to most of The Eagles’ greatest hits–another story).  Pocahontas also gave me my first crush, at least the first I remember.  And no, it wasn’t on John Smith, but on Thomas, the naive and timid redheaded sailor (voiced by Christian Bale) who accidentally shoots Pocahontas’s boyfriend Kocoum.  Some things don’t change.  Again, I still think this is a beautiful movie.  I know people complain about the historiography, but it was never intended as a documentary.

3. Bambi.  As a child, I had a Bambi stuffed animal, and I liked Thumper (I remember quoting, “If you can’t say somethin’ nice, don’t say nothin’ at all,” still good advice for most contexts) and Flower, the really cute androgynous skunk.  Then I guess I got “too old” for Bambi and kind of forgot about the movie until one family trip to Disney World; I believe it was the one shortly after I graduated from college.  We were at Disney Studios watching one of those compilation films about the magic of animation or whatever, and suddenly the frantic pace of the clips slowed down and they showed that scene in which Bambi steps out into the clearing and asks, “Mother?” and the stag–Bambi’s father, though Bambi doesn’t know it–approaches and says, “Your mother won’t be with you anymore, Bambi.”  Standing in a room full of tourists, I started weeping.  It was embarrassing, but cathartic.  I still think that’s a brilliant scene–no music for emotional manipulation, just the stark colors of the deer against the snow and that spare, heartbreaking dialogue.  (Ok, I’m tearing up while writing this.)  Bambi is like that in general–a very simple story, no flashy songs and a small cast of (non-wisecracking) characters.  The animation is beautiful.  I am not ashamed to say that I own a Bambi t-shirt.

4. Beauty and the Beast.  I liked this movie when I was a kid, but didn’t truly appreciate it until I grew up.  I’ve always identified with Belle because she likes to read, but now I see that there’s much more to her.  She’s a lot like Jane Eyre in that she has just the right combination of strong will and empathy to be able to transformatively love a selfish and deeply wounded man while still retaining her own identity and protecting herself emotionally.  This, too, is a beautiful movie.  Of course the songs are great, but so is the score.  The settings are so atmospheric: the gloomy castle perfectly matches the Beast’s mood, and the forest outside it is truly desolate.  And I love the way the prologue uses animated “stained glass” to tell the Beast’s back-story.

5. Peter Pan.  This is one of my favorite stories, period.  (It’s Victorian, and it’s magic.  Therefore, I love it.)  The Disney movie isn’t a perfect adaptation, but there’s no such thing.  Certain things about it are perfect, at least to me, like the iconic image of the children flying over the nighttime silhouette of London, something no previous adaptation was able to capture and no subsequent one has attempted to try.  The songs are very good, especially “You Can Fly.”  I also love the way the musical sequences add to the character development in subtle ways.  (For example, the song “Following the Leader” seems like nothing more than a fun romp, but it illustrates the idea, which is barely latent in the J.M. Barrie story but makes perfect sense, that John Darling would see Peter Pan as a rival.)  I know most people think of Tinkerbell when they think of this movie, but I could take her or leave her.  For me, it’s about Peter, who is one of my favorite trickster figures, and the Darling children, who react to being essentially abducted from their home in fascinatingly different ways.  I also like the Lost Boys.  And the Peter Pan ride at Magic Kingdom is wonderful.  Yes, it’s a really short ride with a really long line, but it’s totally worth it. 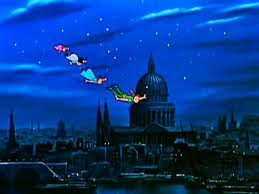 Second star to the right and straight on ’til morning!