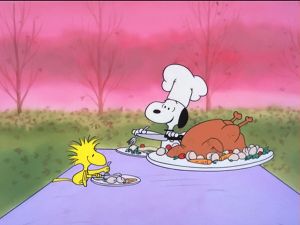 Happy Thanksgiving from all of us: Snoopy, Woodstock, Penelope, and Tess
photo credit: http://collider.com/peanuts-holiday-collection-blu-ray-review/63423/

Tonight I thought I’d be all domestic and try out a new recipe.  Well, that’s not exactly true.  Here’s how it actually went down: On Monday, my co-worker who directs the Foreign Language Lab was going around asking people from Canada, Korea, etc., to contribute desserts to tomorrow’s International Candy and Dessert Tasting.  When she approached my office, I quickly attempted to ward off the question by saying, “I’m an American!  You don’t want my food!”  But apparently the United States is a nation, which means it’s included in “international,” so my excuse didn’t work–which was fine, since I do like to bake.  In keeping with the educative nature of the event, I decided to contribute a regional favorite from Pennsylvania.  I had always thought it was a specifically western PA specialty until I learned in my research that it’s also popular among the Amish.  It also exists in New England, but under a different name–read on.

I’m speaking of the gob.  The term gob, like hoagie (i.e., a sub) and steamer (i.e., a sloppy joe), is a word designed by Pennsylvanians to confuse other English speakers.  Most people, if they are aware of this delicacy at all (and I’m finding that a lot of people aren’t) call it a whoopie pie.  Regardless of what you call it, it consists of two large, soft chocolate cookies (really more like cake rounds) with marshmallow creme or another white icing-like substance between them.  Invariably, they are served in plastic wrap (because they tend to stick together), which makes them great for bake sales.  The best thing about gobs from my standpoint as a dilettante baker is that they don’t have to look good; they just have to taste good.  Also, please note: If you’ve had a Moon Pie or one of those Korean Choco-Pies, you have not had a gob.  Similar concept, but the store-bought ones are pale imitations.

After a brief evaluation process, I decided on a recipe from this website, which not only details the history and geography of the gob (the site favors the term whoopie pie, unfortunately) but also provides several variations of the recipe.  I went with the Amish Whoopie Pie, figuring it would be the closest to the experience I wanted to capture.  If you don’t have an electric mixer, though, go with one of the other two recipes.  I don’t have one of those fancy stand mixers that’s pictured on the site, but my bright green Kitchen Aid hand mixer (a birthday gift from my parents, who are probably tired of buying me kitchen appliances) works just fine.

That’s about all I can tell you right now because I haven’t assembled my gobs yet; I’m still waiting for the cookie part to cool.  Well, I can tell you that the batter tastes really good.  I’m a little nervous, but since odds are that most of the people at tomorrow’s event won’t know what a gob is supposed to look or taste like, there’s not much pressure, I guess.  I have some extended family members who would probably destroy me in a gob-baking contest, so perhaps next time I’m with them, I can watch them at work and try to learn their ways.  Meanwhile, give the recipe a shot and let me know what you think.  And if you’re in Lynchburg on Wednesday, November 14, stop by Liberty University’s Center for Writing and Languages and try one of mine!